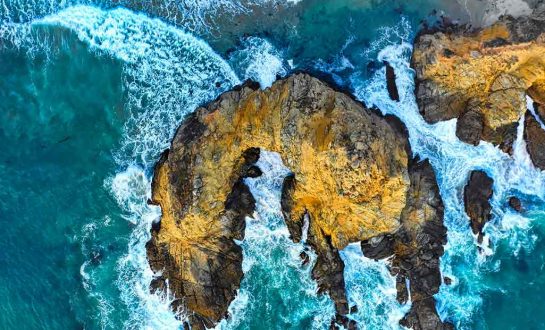 Our oceans contain 20 million tons of gold, but at only 13 billionths of a gram per litre of water, gold recovery is difficult.

Now, what would you do if someone showed you, directly in front of your eyes, that they could recover massive amounts of gold from our oceans, every single day?

After lifting your jaw off the ground, you’d probably want in, right? Well, that’s exactly how two men duped investors for over a million dollars ($26.9 million by today’s standard) in the late 1890s.

Leading a couple of potential investors to the end of a pier, Prescott Ford Jernegan was ready to show off his new discovery. Jernegan had developed a special zinc-lined bucket, which he called a “gold accumulator,” with the ability to extract gold particles from seawater.

After adding some mercury into the bucket, it was lowered off the pier and a battery was switched on. As it remained underwater overnight, gold particles floating in the ocean attached themselves to the mercury in the bucket. To ensure no funny business was afoot, they kept watch over the apparatus the entire night. In the morning when the bucket was pulled up, there was indeed mercury-infused gold inside.

The investors, impressed by what they had just witnessed, bought in. And thus began one of the greatest gold hoaxes in history.

Jernegan was a Baptist minister who preached in different states through the early 1880s and 90s. During this time, he made important connections that would prove useful in his future as a con artist.

Jernegan was often sick and afflicted with financial struggles. He felt unappreciated and underpaid for the work he had been doing for the church. In a quote from the New England Historical Society, Jernegan expresses these thoughts clearly:

“I had always been hanging on to the ragged edges of things—a man of educated tastes, of delicate health, forced to exist on the pittances of a day laborer. All my life I had existed on the husks. I had been patronized by illiterate snobs. I had been underpaid, my mind had become embittered by a thousand acts of injustice.”

Jernegan was recovering from a bout of typhoid fever when he had a dream in which seawater turned into gold. He shared this strange dream, and the idea it inspired for a potential scam with his childhood friend Charles Fisher.

Fisher was cunning. His employer at a dry goods store in Brooklyn described him as a “schemer.” Most importantly, Fisher was a trained scuba diver.

Jernegan and Fisher also sought the help of a third man, William Phelan, to get their “business” off the ground.

The Hoax In Action

Above seawater, it seemed as though the gold accumulator actually pulled gold straight from the water using its advanced technology, but the real explanation was much simpler. Fisher, using his diving experience, followed a copper wire laid by Phelan along the ocean floor to the proper position underneath the pier. When the gold accumulator dropped below the water’s surface, Fisher dumped out the mercury and replaced it with mercury-infused gold. The gold was then hauled back up, and given to the investors to analyze.

After seeing that the gold was real, investors provided the startup money Jernegan and his friends needed to launch their marine gold recovery business. Thus the Electrolytic Marine Salts Company was born.

Using Jernegan’s connections as a minister, word quickly spread of their incredible discovery, and the money poured in. To keep their operation away from prying eyes, they set up shop in Lubec, Maine. The small town had high tides and strong currents which, according to Jernegan, were extremely important for the gold accumulators to work.

At the peak of their operation, the Electrolytic Marine Salts Company had over 100 employees and over 200 gold accumulators. They had raised over $1 million in investor cash. By this time, Phelan had enough and bowed out of the scam.

The operation continued in Lubec, with Fisher diving and placing gold, which they had purchased with investors’ cash, in the buckets. This held off any suspicion of trickery. The gold accumulators seemed to be working splendidly!

Eventually, Phelan demanded money to keep his silence and threatened to expose Jernegan and Fisher. After the two men refused, Phelan made good on his threat and published a story in the New York Herald revealing the operation as a con, and the jig was up!

By the time investors arrived in Lubec to demand an explanation, Fisher and Jernegan had fled. Hundreds of people were immediately out of work, and the town of Lubec had a giant mess of fake machinery along their shores.

Fisher was never heard from again.

Jernegan escaped the U.S. and fled to Europe. Hit by a strike of good conscience, he sent back $85,000 to the investors he had swindled. In total, investors were paid back 36 cents on the dollar.

After some time in Europe, Jernegan became a teacher in the Philippines, authoring a few history books before returning back to the U.S. He passed away in 1942.

There is currently no economically viable way to recover gold from seawater. However, we do have ways to recover fine gold particles using processes like gravity concentration, froth flotation, and leaching. While not as exciting as pulling up buckets of gold every morning from the ocean, these processes actually work.

If you’d like to speak with real gold recovery experts, contact Sepro. We have the equipment, knowledge, and experience to deliver real results.