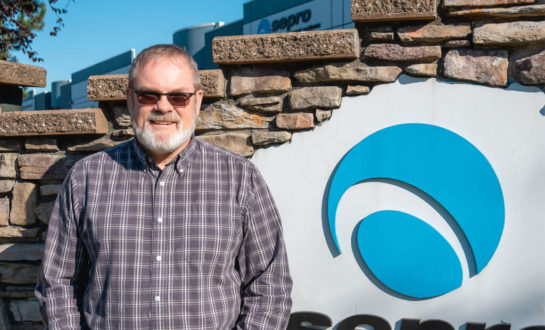 Mark Vinchoff, Sepro’s VP of Engineering, is responsible for bringing to life some of the best mineral processing equipment available in the industry. The equipment he has helped design and build is used in mineral processing and aggregate operations around the globe! Some notable achievements include developing the Falcon line of gravity concentrators and the Blackhawk 100 Cone Crusher.

Having 29 years of experience designing, building, and perfecting machinery, who could be better positioned to share some insights about our industry? In this short interview, we took some time to get to know Mark a little bit.

Hello Mark! Thanks for taking some time to answer a few questions. Could you start by telling us a little bit about yourself? Where did you grow up?

I grew up in London, Ontario, a small city about two hours west of Toronto. I moved around a little bit, attending high school in Strathroy before moving to Grand Bend in the early 80s.

I then went to Lambton College and earned a degree in mechanical engineering technology. After school, I started working for Atomic Energy of Canada Limited in Deep River. Lucky for me, this is where I met my future wife. Together we decided to move to BC, but not before moving to China for eight months.

What made you want to live in China?

We wanted to travel the world, but it was too expensive. My wife got a job teaching medical English at a hospital in the province of Henan. Since she’s an occupational therapist, she was qualified to teach medical English over there.

During this time I was learning Chinese as well, and we spent our final two months travelling through China. By then, I was able to order food, buy train tickets, and also haggle with the locals for better prices. Products over there have two prices, a local price and a foreigner price. I think I was able to bargain enough to pay somewhere in the middle. It was a great experience.

Sounds like you had a great time! Switching gears a bit, Vinchoff wasn’t your last name at birth, correct?

That’s right. My last name at birth was Vink and my wife’s last name was Osochoff. We decided to combine the names to make Vinchoff to save our kids from any school embarrassment.

Vink doesn’t rhyme with a lot of good words!

But, we changed our names before we got married and that was a bad decision. On all the documents, like for instance the wedding registry, we had the same last name. It seemed like we were brother and sister when we got married! So, if you plan on changing your names, do it after the wedding!

That’s a good tip! So, what brought you to working at Sepro?

My wife and I moved to Burnaby in 1995, and I had two job offers: one from a conveyor company and one from Sepro, which at the time was just called Falcon Concentrators. I interviewed with Steve and was promised the world. I was the sixth hire for Falcon.

What are some of the significant changes you’ve seen on the engineering side of the industry over the past 25 years?

For starters, there were the only two engineers including myself at the very beginning. Our first project was the L40, which is now used for lab testing, and then we worked on the Falcon SB Gravity Concentrator for years. We saw a change from manual draft to AutoCAD, and then to 3D software like Solid Edge and Solids Works.

It was just a couple of guys for a good 10 years before the company started to expand. Now, including contractors, we have a team of 20+ people. In 2007, when we bought Sepro Mineral Processing International, we expanded again and that brought a bunch of changes too.

What’s the most interesting product you’ve worked on so far?

The Blackhawk Cone Crusher by far, because of the complexity. You’ve got multiple systems including hydraulic, lubrication, and electrical. The machine itself is significantly more complicated than other pieces of equipment. The gearing, for instance, is high power and quite compact.

There are also a lot of forces involved in the cone crusher, precision fits, and heat and shrink fits. It’s a lot of engineering in a compact package.

When something breaks in the field and you have to find out what went wrong. You need to ask yourself,
“Is it an engineering problem? Application problem? Operator problem? Something else?” Dissecting these issues is definitely tough.

Something I’ve learned a lot about while developing mineral processing equipment is fatigue cracking in the welds. It’s a dynamic challenge since the standards are always changing. We were working on 1999 standards for the Blackhawk Cone Crusher and then in 2014, the standards changed. It’s a moving problem.

We use finite element analysis to analyze our products but even in that world if you don’t truly understand the forces and loads involved, it’s garbage in and garbage out. You need to truly understand what’s going on and this comes with experience, especially field experience.

What are some of the current projects in the engineering department?

We are putting lots of effort into developing the Sepro Aggregates product line. We’ve got some innovative ideas in crushing and comminution, some peristaltic pumping applications, and some ideas in the arena of gold centrifuges.

There’s no shortage of ideas!

What do you do when you’re not at work?

I love the outdoors: hiking, kayaking, canoeing, biking, all that stuff. My children are mostly out of the house. My son likes golf so I play with him once in a while. I also have a golden retriever that likes water, so we take lots of trips to local lakes and rivers around Vancouver.

What did you do during your last vacation?

Our last vacation was in Shuswap. My parents recently moved out here so we rented a cabin and a boat and the whole family came up. So it was a mini family reunion in Shuswap.

Thanks, Mark! We appreciate you taking the time to sit down with us and answer some of these questions.

Thanks to people like Mark, Sepro has been the source of mineral processing innovation for over 30 years. Speak with an expert today about our mineral processing equipment and how Sepro Systems can help you out with your current project.