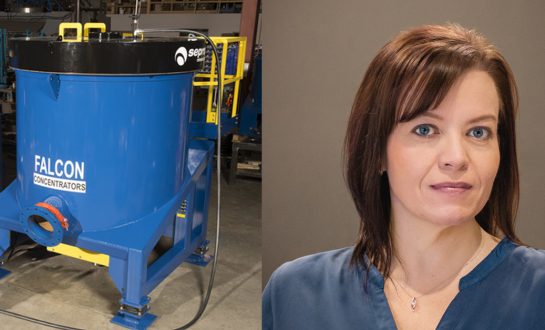 Heather Schwalm was recently hired as Sepro System’s VP Finance & Administration , making her the first female executive in the company’s history. Heather brings a wealth of experience to the position earned from a diverse career. She has helped a manufacturing company triple their revenue, kept oil refineries working year after year, and managed international relationships for a biotech company. On top of her successful career, she’s also a proud mom showing her daughter that anything is possible.

To learn more about Heather and what led her to Canada’s largest supplier of mineral processing and aggregate equipment, we sat down with her for a quick chat!

Hello Heather! Thanks for taking time from your busy schedule to chat with us for a bit. So to start, could you tell us a little bit about yourself?

Sure thing. I grew up in the Okanagan, Kamloops, Penticton, and Kelowna areas. I moved around a bit after university, working full time and putting myself through school at night to get my accounting designation. I worked in Northern Alberta for a bit in the oil patch, and also a little bit in construction.

Interesting⏤you moved right from the Okanagan up north to the oil patch. Early on you took an industrial route with your accounting. What drew you to this?

I started working for a heavy construction company in the Lower Mainland called Columbia Bitulithic, which was later bought out by Lafarge Canada. I was working as a cost accountant for them while starting down the path toward getting my designation. It was my first real job.

Within six months I was promoted to District Accountant for all of the northern operations, so I took care of everything north of Williams Lake, which included all of their highway jobs. We [my husband and I] were living in Prince George at the time. We were there for about eight months but my husband couldn’t find any work. So, he moved over to Grand Prairie to work in the booming oil patch. At least, at the time it was booming. I followed him over there and started working for an oil recycling company called Newalta.

Do you find any industry particularly challenging?

Okay. So after Grand Prairie what was the next big step in your career?

We moved down to Newalta’s regional office in Edmonton where I took on a little more responsibility. While I was working in Grand Prairie, I was looking after six oil field plants. Then, when I moved down to Edmonton I took on an additional three plants for a total of nine plants. In the Edmonton office they asked me to move again, this time to the Calgary office so I could take on even more plants. At that point, my husband was like, “Whoa, enough moving!” We had moved so many times in such a small time span, so we didn’t end up moving to Calgary. Instead I made the jump to biotech to work for a cancer research company.

Wow, that’s quite a jump! What was working in biotech like?

It was busy. At the time they had about ten projects worldwide including clinical trials. The most prominent one was a worldwide trial for stage 3 and 4 breast cancer. It was a joint venture with Merck, and McKesson was also supporting them. The research was quite interesting. It involved extracting molecules from sea mollusks and we used mice for testing. It was very R&D based. We had no real fiscal streams other than investments and the funds we were getting from the clinical trials themselves.

Working in cancer research is very different in that you have to really step back from the personal side of things. You’re dealing with mortality rates and having to talk about people in terms of numbers. So I found that a little unsettling at first, which posed a bit of a personal challenge. It was something I wasn’t anticipating.

We had a very strong team in terms of scientists that were directly spun out of the University of Alberta. It was fascinating, absolutely fascinating work. But they were bought out by Merck when their largest clinical trial wasn’t approved by the FDA. Then they started winding up the company. Even though I was still there I decided to leave and make the leap over to one of our partners, McKesson, to work in software development.

At McKesson I moved away from traditional accounting roles and became a financial analyst. I was the only financial analyst for one business unit they had in the Lower Mainland which developed software for hospitals in the radiology department. They were working on recognition software so that the radiologists wouldn’t have to sit there and type in “left knee” or “right shoulder.” Instead, the software would auto recognize the body part being scanned to increase efficiency. It was also a patient archiving system: it would record everything electronically.

We were also dealing with a cardiology business unit in Israel and we had an outsourced 24-hour customer service team overseas too. So, having to deal with people all over the globe was quite interesting.

Wow! You know, there are some stereotypes about accounting, and this sounds a lot cooler than what we would normally associate with corporate accounting.

No kidding! So with all these different industries and different leaps, how did you end up with Sepro in the mineral processing industry?

So from McKesson I started working right across the street from Sepro at the Vitrum Glass Group. I was there as their top finance person, the Director of Finance, for eleven years. They’re in manufacturing, but a slightly different side as they create custom windows. While I was there I helped the company grow from a size of about 120 employees and $35 million in revenue to 550 employees and over $100 million in revenue in eleven years. So that was a lot of growth in a very short period of time. And we grew to a group size of over 23 companies all over the Lower Mainland.

Yeah! I helped Vitrum expand into the US, working up the market channel for California and shipping to Oregon and Hawaii, mostly along the Pacific Coast. But, after being there for 11 years, I started getting itchy feet. There’s no other way to describe it. I needed to do something different, and I was kind of bored with windows.

So I dabbled in some things that weren’t the right fit. Then the role at Sepro came along and immediately I said, “Yes, this is what I need to be doing.” Everything about the company just lit me up. It was progresssive, and I felt that the culture was spot on with where we needed to be in today’s age with flexibility and support for employees. The work Sepro does on a daily basis I find really interesting too⏤the things we’re sinking our teeth into and the changes we’re looking at daily.

Is Sepro a challenging company?

The challenge is that it’s a global company. There’s a lot of issues with being worldwide while keeping the Canadian corporate culture. We get a lot of different issues with contracts, and issues like the coronavirus which has put a few things on hold for us globally. We’re dealing with market forces that are completely outside of our control, but that’s also what makes it interesting.

Going back to something you said earlier, you mentioned that Vitrum does a lot of custom work. How much does that carry over to Sepro? It’s something that we do a lot of as well.

It’s really quite transferable in that you can put that same hat on again and recognize that you do have to be flexible in your manufacturing processes.

Outside of work, when you’re not tackling these challenges what do you like to do? What helps you decompress?

When the weather cooperates I’m out on my roadbike cycling, putting the miles on that. That or I’m painting. I quite enjoy painting. My daughter keeps me busy too. She has us running around to horseback riding, soccer, piano, and choir.

Sounds like she picked up her mom’s trait of wanting to do a lot of different things and take on some challenges.

Yes, she is very energetic and always wants to try new things; I encourage her to do that. I am also involved with an organization called The Sky’s No Limit – Girls Fly Too!which is an organization to get girls and women interested in STEM (science, technology, engineering and math).

Once a year they put on an air show out in Abbotsford where they bring in the Canadian military, US military, or the Air Force and their planes and you get to climb all over the planes and the jets, sit in the cockpits and talk to the female pilots. It’s really quite fascinating.

I also got invited out by the Canadian Navy with a group of 60 women to spend the full day on the HMCS Vancouver. We left downtown Vancouver and we were taken out on the water while they were doing full tactical maneuvers. We were taken into the torpedo rooms, and we were escorted all over the ship. We spent the whole day learning.

On the way back to port a few of us were invited up onto the bridge and we were there while they were navigating the Vancouver Harbour. It wasn’t just all women on the bridge either⏤there were men there as well. It was really fascinating seeing how these women actively participated with their knowledge of operating the ship and operating the helicopters that were flying all around us. It was very encouraging.

One of the biggest reasons I wanted to do this was to show my daughter that there are so many different opportunities out there for her. And these opportunities aren’t necessarily military based, but things she can do if she just looks outside her comfort zone.Since my experience with the Canadian Navy, she’s taken an active role in seizing whatever comes her way, and she’s only 9!, I’m putting her on the path to see that there’s more to this world than just what someone might tell her she needs to be doing.

That’s so cool! And we’re sure she’ll accomplish great things, just like her mom. Thank you so much for taking the time to speak with us!

Heather is just one of the great people we have working at Sepro Mineral Systems. You can catch more interviews like this one in our mineral processing blogs! To stay up to date with all of Sepro’s staff and to get the latest mineral processing information, sign up for our newsletter.